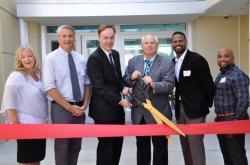 ICEF Public Schools Board of Directors

The Board of Directors for ICEF Public Schools has the legal and fiduciary oversight of the operating entity that employs nearly 400 people and educates more than 3,500 students annually. This responsibility includes all the requirements for a public entity, such as following the Brown Act for public meetings, formal board resolutions for state-required items, etc., as well as the important oversight of the CEO and senior management.​​​​​​​

Members of the Board

David Moore, Chairman of the Board of Directors, is CEO and President of Interconnect Solutions Group, Inc., a manufacturer's representative group that is the exclusive agent in Southern California, for, Gleaner, Inc. (a world leading supplier of interconnect products to the aerospace military and commercial markets). He has been a View Park Prep parent since 1999 and joined the ICEF board in 2003. Mr. Moore serves on the Deacon Board of West Angeles COGIC; is an active youth leader with Boy Scouts of America; and has served as a youth coach in several sports. Mr. Moore, his daughter, and several family members are graduates of Dartmouth College. He is proud to say that Dartmouth was the first Ivy League school to graduate an ICEF alum.

Tom Strickler is a co-founder of Endeavor, a leading talent agency in Los Angeles that represents writers, directors, producers and actors in the motion picture and television industry.  During his 14-year tenure at Endeavor, the company grew from 4 to 800 employees with over $300M in annual revenue. A graduate of Harvard College, Mr. Strickler headed up the two largest student theatrical agencies of the university – The Hasty Pudding Theatricals and The Gilbert & Sullivan Society. Conscious of a desire to “work in a ‘high need’ business,” Mr. Strickler decided to open charter schools in the Boyle Heights neighborhood of Los Angeles. “I can’t change the world or fix public education,” Tom concluded, “but I can make a difference… Look at the world with compassion. Find a problem that tugs at your heart, and work on it. You will find it rewarding.”

William B. Lucas is a Co-Founder and Principal at Cataumet Partners, a provider of long-term wealth management services to families and individuals.  A graduate of Princeton University and Dartmouth College, Mr. Lucas is skilled in mergers and acquisitions, legal and regulatory regulations, analysis and interpreting complicated numerical information, providing investment advice, tactics and preparing legal documents – a perfect fit for ICEF Public Schools.

Tramell Johnson, a 12 year Air Force Veteran, is a graduate of Argosy University and the University of Southern California, Marshall School of Business. He recently served on the Department of Defense as an education and training manager at Los Angeles Air Force Base. He currently works as a consultant for Troops for Teachers.

Brandon A. Roberson has worked in the field of education since his graduation from the University of California, Irvine and Loyola Marymount University. An accomplished classical and jazz musician, Mr. Roberson has performed in African, jazz, and symphonic orchestras, then as Church Musician for Christ Centered A.R.M.E.D. Ministries.  He currently works as Director of the Learning Resource Center at Mount St. Mary's University.

Kenneth Christmas is an entertainment business and legal affairs executive, entrepreneur and attorney. His professional experience includes negotiating deals in television, film and music, managing individual celebrity brands, developing and producing original television and film content, and training and supervising personnel in a corporate environment. As Senior Vice President of Business and Legal Affairs for Mar Vista Entertainment (Mar Vista), he oversees the negotiating and shaping of complex business transactions in the areas of development, production, finance and distribution of television and film.​​​​​​​